An ongoing study by the University of Colorado Boulder demonstrated that Carrier air purifiers are able to sustain significantly reduced levels of airborne particles – between 42 – 67% lower on average – in occupied K-12 classrooms with older, outdated HVAC equipment. According to the EPA, exposure to airborne particles, also known as particulate matter (PM), can have a negative effect on health, particularly to the lungs and heart. These findings are especially notable for school districts with aging infrastructure that are aiming to improve classroom air quality without replacing or modifying existing systems. The results are based on independent testing at a public school located in Denver, Colorado. Carrier is a part of Carrier Global Corporation (NYSE: CARR), the leading global provider of healthy, safe and sustainable building and cold chain solutions.

The study took place in two buildings with significantly different ages and HVAC equipment at Cheltenham Elementary School, in cooperation with the Denver Public School District. Particulate matter exposure comparisons were taken from an aged 1960 classroom building and an adjacent, newer building fitted with modern air handlers installed in 2004 and upgraded in 2019. University of Colorado Boulder engineering teams measured how often air was being exchanged in the rooms in both wings and then placed Carrier air purifier XL models in multiple classrooms in the “old wing.”

Prior to deployment of the Carrier air purifiers, classrooms in the “old wing” had markedly higher PM loads than their counterparts in the “new wing,” regardless of air exchange rate – most notably in particles less than 2.5 micrometers in diameter, which can pose the greatest risk to health. Carrier air purifiers respectively set to provide air flows of 500, 750 or 1,000 cubic feet per minute (CFM) were placed in three “old wing” classrooms. The units were found to effectively increase air exchange rate, or the rate at which the air purifiers returned purified air to the space, and brought the aerosol levels in older classrooms to levels at or below those observed in newer classrooms. In addition, the air purifiers’ sound emissions during operation were sustained at or below World Health Organization guidelines for classroom instruction.

“As part of the layered strategy for improving classroom air quality, the technology deployed in Carrier air purifiers is highly effective and remarkably quiet,” said Justin Keppy, President, NA Residential & Light Commercial, Carrier. “This independent study proves that the addition of Carrier air purifiers can significantly improve the air quality in classrooms and provide a healthier environment for students, teachers and staff.”

The Carrier air purifier, a product offered through Carrier’s Healthy Buildings Program, combines three different filtration technologies to create healthier indoor air. First, a pre-filter removes large airborne particles like dust and dirt. Then, an advanced high-efficiency filter captures over 99% of particles across a broad range of sizes. Finally, an activated carbon filter removes odors from the air. And with a simple plug-in set-up process, consumers can immediately begin to filter and monitor their air.

For larger classrooms or spaces such as cafeterias and auditoriums, Carrier offers the OptiClean™ air scrubber , which uses a long-life HEPA filter to remove 99.97% of airborne particles size 0.3 microns to provide cleaner indoor air. An easy way to supplement an HVAC system without replacing or modifying existing equipment, the OptiClean air scrubberplugs into a standard outlet and comes in two sizes with a maximum 600 CFM or maximum 1500 CFM.

More information on the science behind the Carrier air purifier and the testing is available here. To learn more about Carrier’s Healthy Buildings Program, visit: Corporate.Carrier.com/HealthyBuildings. 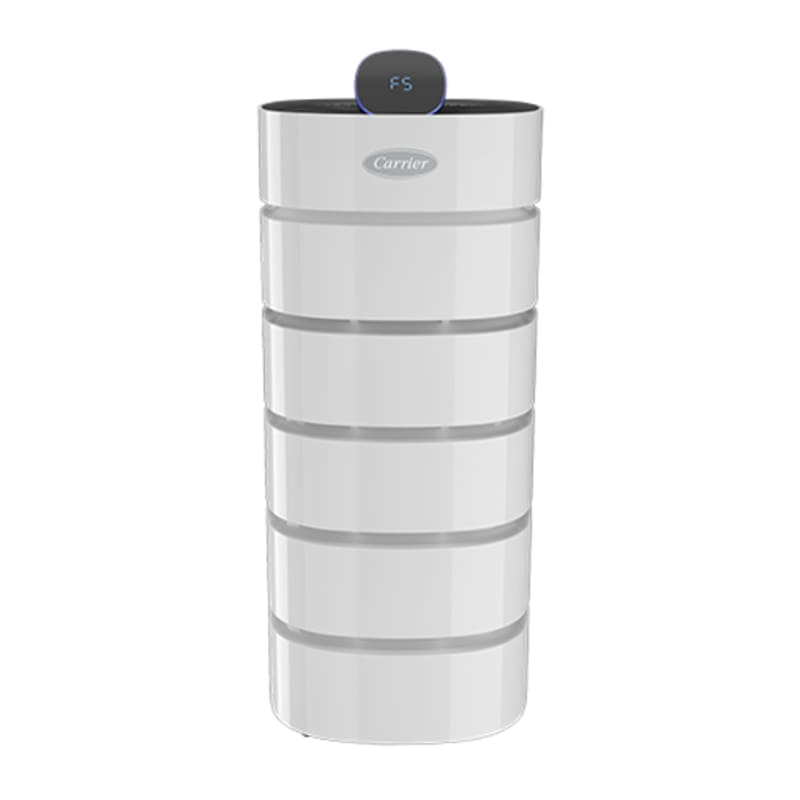